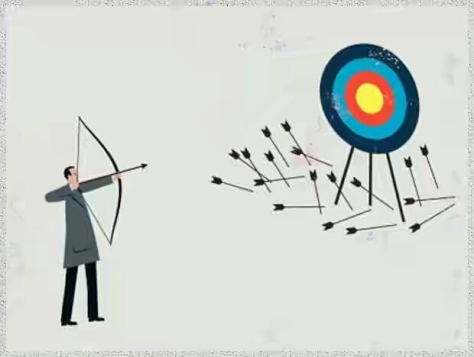 We live in a world that glorifies success and rightly so. We celebrate the successful and despise the failures, success stories become “motivational” speeches on how to “make it” in life. The successful become celebrities and famous, be it in politics or film ,in industry or science we make celebrities out of those who have achieved.

Now there is nothing wrong in that, except that in celebrating a point in a journey we forget and unconsciously neglect the whole journey. So those who fail amount to nothing, are not reckoned with are despised and  not allowed to talk.

We have naively chosen to forget that success is neither spontaneous nor instantaneous. There is no “big break”, no ” epiphany”, rather success is a  process at the beginning of which you will almost certainly find failure.

The enigma of the Living, is that he who lives has to fail in other to succeed. By trying and failing, you have become a little bit more successful than you were before you failed.

For every attempt you make to succeed, you break down barriers and obstacles first in your own mind before you go ahead to make an outward effort to be successful. That’s a measure of success; believing that you are more than what you see and striving for greater things.

The problem with failing is not in its nature but in its interpretation. The individual who fails loses self esteem , becomes discouraged, gives up at times , becomes frustrated at other times. But it is in those who see failure as a learning experience and a spring board to try again that you glimpse the power of failure to push , to encourage to motivate to strive more to work harder. It is all because they understand failure not to be the end but a point in the journey just like success ddoes

Some people fail to succeed so they may end up valuing the success more, others succeed without failing they may despise failure and think success is a right, while still some may succeed just to fail ,when they find success again they are wiser and better understand that life is full of points but each stop doesn’t define the journey only the end does.